Overview
Robots are more and more widely used in finished bag palletizing or carton palletizing, and they are more and more recognized by the market. It has advantages unmatched by other equipment. In recent years, in Europe, America, Japan, and other developed countries, the application has exceeded 70%. Especially in Japan, robot palletizing applications occupy more than 90% of the palletizing market. Most of the palletizing operations are performed by robotic palletizing. The palletizing robot can be adapted to palletizing finished products in various shapes such as cartons, bags, cans, bottles, etc. At present, there are four major palletizing robot brands in the world, namely Japan-FANUC, Germany-KUKA, Switzerland- ABB, and Japan-Yaskawa. These four companies have a global market share of more than 50% and reached the Chinese market. Above 60%.Benefiting from the increase in global automation rates (especially 3C products) and rising market demand in emerging countries, the strong performance of the four major families in 2007-2019 was outstanding. especially in China, the robot application market has exceeded 100 billion. In the meantime, Chinese high-tech companies have also participated in robotic R & D, design and manufacturing to cope with the trend of automation upgrade. At present, well-known robot brands such as Guangzhou-STS, Guangzhou-GSK, Shenyang-Xinsong, etc., have also been strongly applied in the Chinese market, occupying more than 30% of the Chinese market and also exported to foreign markets, serving foreign companies.

Driven by Industry 4.0 and intelligent production, the phenomenon of “machines replacing people” is becoming increasingly common. The introduction of robots is helping global manufacturing move towards automation and intelligence. So, what are the advantages of using robotic palletizing in general? I briefly do an inventory.

The first, In terms of efficiency, palletizing robots can not only bear high loads but also have speed and quality much higher than humans. At present, a four-axis robot is taken as an example. According to the different loads, it is divided into 100kg-700kg models. It can reach a maximum movement speed of 2500mm / s in a linear movement; the maximum carrying capacity can reach 1600 times/hour.
The second, In terms of safety, although human beings are omnipotent, they can perform difficult actions according to their own ideas. However, humans need time to rest and replenish their physical strength. Unlike robots, they can work 24 hours a day without interruption. In the meantime, in environments where the dust density is high or the environment is dirty, which harms the human body, palletizing the robot is completely replace workers to eliminate corporate concerns about employee health issues and reduce corporate risk.
The third, From the perspective of accuracy, each palletizing robot has an independent control system and servo drive, which greatly guarantees the operation accuracy, and the repeat accuracy is ± 0.5mm, and the palletizing height can exceed 2 meters, which is different from the manual palletizing-irregular and low height; can fully meet the positioning requirements of logistics palletizing operations.
The fourth, In terms of cost, although the palletizing robot has a high initial investment, it can maximize the marginal cost-effectiveness, and each robot cost is controlling. The hardware and software of robotic used by each company have gone through tens of thousands of Load tests of times and then leave the factory. It is stable and you only need to pay attention to regular maintenance every year, and after-sales costs can be saved basically. On the other hand, most of palletizing robots are four-axis applications. Through technology research and development, and cooperation with internationally renowned robotics companies, the performance of china palletizing robots has been stabilized. In order to save costs, Chinese brand robots can be considered.
The fifth, In terms of signal connection, the palletizing robot can communicate through “point-to-point”, or through different international standard bus interfaces (such as CC-LINK, PROFIBUS, DEVICE NET, etc.) or Ethernet. The equipment and the computer exchange signals and data to realize on-site networked control. It can also set and flexibly optimize different motion strengths through software programming to achieve palletizing requirements for different production product models on the site, only through the touch screen Switching, or remote control through networking greatly improves efficiency, reduces costs, and saves personnel.
In the sixth, In terms of operation, the palletizing robot control system is constantly adding new scientific and technological achievements. For example, by using 2D and 3D vision systems, the robot can automatically identify the position of the object to be grasped and automatically generate data; For forming, the operating staff only needs to select the same type of palletizing to decode the palletizing program; this intelligent design makes the palletizing operation more flexible and makes it easier for operators to maintain.

In conclusion:
The use of robotic palletizing save 130,000 yuan per month in electricity costs compared to high and low level palletizing. Using robots to replace manual palletizing increases electricity costs by approximately 40,000 yuan. Based on comprehensive calculations, using robot palletizing can save RMB 250,000-400,000 per year than manual. 2-3 years is enough to save the cost of equipment investment while reducing labor costs and labor management costs (other costs such as employee pension insurance have not been included). 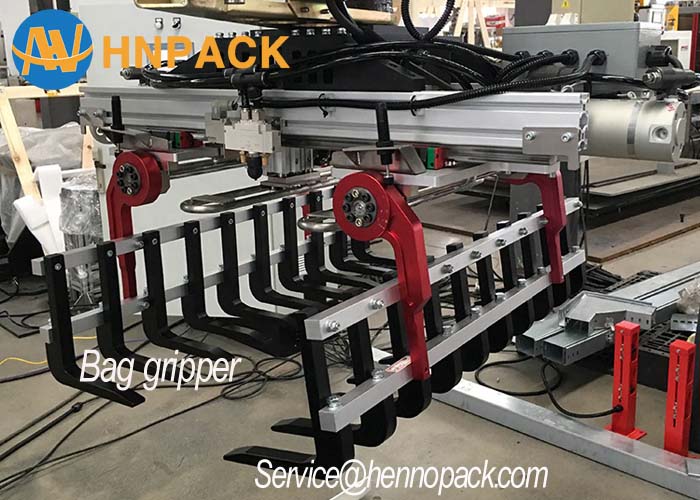 Well, the above is all about how the features of the robot palletizer are in this chapter. With the transition from industrial manufacturing to intelligent manufacturing, the application of robots will become more and more widespread. In the future, maybe we have robots around us. If there is something you don’t understand, it doesn’t matter, the solution is as follows:

Is there any tracking number for my item?

Yes, we ship every order with their tracking number,and you can view the shipment status on the comesponding website.

How could I know if this machine is suitable for me?

Before ording, we will provide every details of the packing machine for you reference,or you could tell us your detailed requirement,our technician will recommend the most suitable machine for you.futhermore, before shipment, we can pre-test the equipment to see if it meets your requirements.

I never use this kind of packing machine before,is it easy to learn?

Friendly English manual and operation video will be send together with the machine.if there is still and question,we can talk through phone or skype or wechat or whatsapp.

Moreover,you could come to our factory to learn how to use it before shipment.our technician will give you professional guidance.

Can you do oem?

Yes ,we can do oem products.it’s no problem.

Where is your factory located?how can I visit there?

Our factory is located in ShenZhen city,Guangdong province.it will take 30mins from ShenZhen International airport,2 hours from GuangZhou.

Are you a factory or trading company?

We are professional manufacturer of  end of line packing machines with export license.

How is the packing?

Water-proof plastic film package with foam protection in each corner.

Save space as much as possible for container loading.

Do you arrange shipment for the machine?

UnderCFR or CIF terms,we are responsible for shipping from china port to the destination port.under FOB/EXW terms,clients shall arrange shipment by themselves or their agent.

HOW can I get the training after I order the machine?

A:machine manual and operation CD will be supplied with you for each machine~!

D:welcome come to our factory to get training in any time~!

What is the delivery time?

it will take 20-25 working days after received the payment.but the exact time is according to actual situation.

we accept sample and bulk order,can supply any quantity.

Choose the best case erector for your Needs

About the Author: Service