What are the styles of the storage structure of the case erecting machine?

Case erecting machine is a collective name for automated carton box packaging equipment. Its main function is to automatically shape cardboard into cardboard boxes through specific mechanisms.At the same time, the bottom of the carton is glued. According to different functions, it can be divided into the following 2 categories: 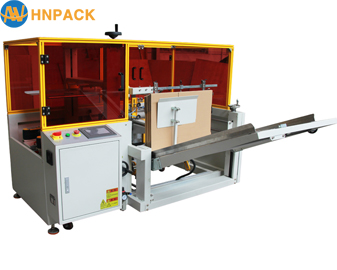 This carton erector uses a vertical device to place the cardboard, and then moves the suction basin to the cardboard through the cylinder for side suction;the cardboard is formed into a carton; at this time, the bottom cover of the carton is folded into each other by a moving mechanism, and then the carton is completed.Finally push the box forward through the push box mechanism to enter the conveying area, and the conveyor adopts the belt side conveying;In the process of outputting the carton, the bottom of the carton is attached to the tape mechanism at the bottom of the device to simultaneously seal the adhesive tape, that is the vertical box erector complete carton forming process.

This carton erector is a horizontal stock design, the cardboard is placed on the end of the device; the cardboard is taken out by suction cup and forwarded to the station to be formed by moving the mechanism back and forth;At this time, the suction basin drives the cardboard from the top down through the movable mechanism, and returns to the original position, forming a carton;during this process, the front and rear cover of the box will be folded by the cylinder mechanism.After the above actions are completed, the front and rear circulation pushing mechanism is used to move the box forward, and the adhesive tape is used to stick on the carton box bottom. 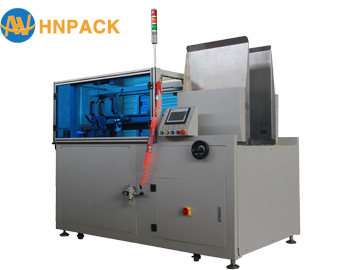 But the process of purchasing carton box opener machines can’t judge the choice based solely on speed requirements, but also refer to other factors. Do you want to know what it is? Please continue to pay attention to us and we will announce answer next time.

Is there any tracking number for my item?

Yes, we ship every order with their tracking number,and you can view the shipment status on the comesponding website.

How could I know if this machine is suitable for me?

Before ording, we will provide every details of the packing machine for you reference,or you could tell us your detailed requirement,our technician will recommend the most suitable machine for you.futhermore, before shipment, we can pre-test the equipment to see if it meets your requirements.

I never use this kind of packing machine before,is it easy to learn?

Friendly English manual and operation video will be send together with the machine.if there is still and question,we can talk through phone or skype or wechat or whatsapp.

Moreover,you could come to our factory to learn how to use it before shipment.our technician will give you professional guidance.

Can you do oem?

Yes ,we can do oem products.it’s no problem.

Where is your factory located?how can I visit there?

Our factory is located in ShenZhen city,Guangdong province.it will take 30mins from ShenZhen International airport,2 hours from GuangZhou.

Are you a factory or trading company?

We are professional manufacturer of  end of line packing machines with export license.

How is the packing?

Water-proof plastic film package with foam protection in each corner.

Save space as much as possible for container loading.

Do you arrange shipment for the machine?

UnderCFR or CIF terms,we are responsible for shipping from china port to the destination port.under FOB/EXW terms,clients shall arrange shipment by themselves or their agent.

HOW can I get the training after I order the machine?

A:machine manual and operation CD will be supplied with you for each machine~!

D:welcome come to our factory to get training in any time~!

What is the delivery time?

it will take 20-25 working days after received the payment.but the exact time is according to actual situation.

we accept sample and bulk order,can supply any quantity.

Choose the best case erector for your Needs

About the Author: Service